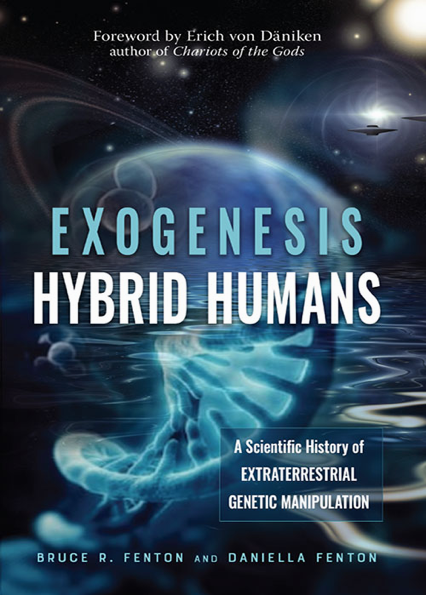 From the Foreword:
"Exogenesis is a significant milesto​ne in understanding our history. It should become a textbook at all schools."
​—Erich von Däniken, author of Chariots of the Gods

Every few years a well-researched book comes along that asks the reader to question certain aspects of humanity's history that have long been accepted by the scientific establishment ​— and most of the public ​— as dogma. In the case of human history and evolution, these certain aspects have become tenets recited ad nauseum, as if history is a fixed religion and previous scientific findings are never to be challenged.

Erich von D​​äniken's 1968 book, Chariots of the Gods, and Zecharia Sitchin's 1976 book, The 12th Planet: The First Book of the Earth Chronicles, are two such books where the authors postulate how humanity came to exist on Earth. They concluded that extraterrestrial biological entities (EBEs, also known as ETs) played an instrumental and decisive role in bioengineering our ancestors or, at the least, guided our species' evolution and development.

The latest such exploration is Exogenesis: Hybrid Humans. In their book, Bruce and Daniella Fenton conduct an in-depth exploration into whether Earth has been visited by EBEs in the past, and present evidence of alien manipulation of the human genome. They also consider if this contact and bioengineering role continues up to the present.

An alternative to an Earthly abiogenesis, the study of how life could have arisen from inanimate matter, exogenesis is the hypothesis that life originated elsewhere in the universe and was brought to Earth purposefully or by accident, but either case likely involved EBE intervention. Exogenesis is similar to the concept of panspermia, where life exists as seeds throughout the universe and Earth life is the result of those seeds germinating in the life-supporting environment of a young planet. Exogenesis is sometimes referred to as directed panspermia.

These ideas of how life started so soon after the Earth coalesced and cooled have had many eminent supporters over the years, including Francis Crick and Sir Fred Hoyle. These and other scientists have looked at areas of study that help fill in the missing pieces to humanity's puzzle. This includes the study of ribonucleic acid (RNA) and deoxyribonucleic acid (DNA), spectroscopic analysis of meteorites and comets, and examination of the liquid methane seas on Titan, the largest moon of Saturn. Each year, new discoveries are made that further indicate the building blocks of life are ubiquitous in the cosmos.

As with all challenges to previous scientific discoveries and agreed-upon facts, when new evidence is presented that evidence must be analyzed and put through the scientific process. If the new conclusions are in conflict with previously established facts, those prior facts must be replaced with the new facts and information, regardless of someone's opinions or concerns about continued grant funding. Fundamentally, this is how science must advance our understanding of the universe and our place in it.

Starting with a deeply personal introspection of their lives and experiences to date, the Fentons explore the metaphysical realms, the broad history of EBE/human contact, the government and non-government projects that listen for extraterrestrial signals and watch for signs, and the subject of government disclosure of aliens, their existence, and their objectives for humanity.

One only has to turn to recent news reports about the "UFO videos" released by the U.S. Navy and their disclosure of a formerly secret investigative effort to study aerial phenomena, known as Advanced Aerospace Threat Identification Program (AATIP), to realize that at no other time in history has it been possible to truly learn the nature of anomalous aerial phenomena (AAPs), including unidentified flying objects (UFOs) and unidentified submerged objects (USOs).

The Fentons present these topics to illuminate and support their theory that humans have been in a constant state of contact with EBEs since the dawn of mankind, and the data they have analyzed suggest humanity's next stage of evolution may involve open contact with EBEs possibly within this current generation.

Simply stated, humanity is much more than it knows itself to be

There is no shortage of books on the above, so-called esoteric topics, but it was the approach, tenor, and research I found in Exogenesis: Hybrid Humans that made me want to investigate further the claims the authors put forth.

It is this "continuum of contact" from a variety of vantage points, including gleaning information communicated through an ancient, sacred Australian Aboriginal artifact, called Alcheringa, that allowed the Fentons to focus on several key elements, as described in their book, and to provide evidence that:

> Studies of specific human genes, such as ARHGAP11B, miR-941, DDX11L2, and FOXP2, point to the possibility of intelligent manipulation and a deliberate engineering of ancestral Homo sapiens as a hybrid species.

> Although wormholes or Einstein-Rosen Bridges are theoretically possible from the human perspective, they may be in actual use by EBEs.

A large, crystalline spacecraft exploded in orbit above Australia, approximately 780,000 years ago, showering the landscape with australites (also known as tektites)

> NASA scientists cannot determine the source of the australites, but they acknowledge tektite chemistry is not the same as that of a typical meteorite.

To say the Fentons are presenting a paradigm shift in the way we must view humanity and its evolution would be an understatement, but it is purposeful that such discussions take place. It is only then that a clearer understanding of humanity's true origins can be achieved.

I recommend Exogenesis: Hybrid Humans to anyone seeking to fill in the gaps of their own scientific study of the connection between EBEs and humanity, and to explore different avenues of available information to learn more about who we are as a species.

Lastly, this quote from one of the most influential science fiction authors of all time helps me keep an open-minded perspective on these important topics:

"Any sufficiently advanced technology is indistinguishable from magic."
— Arthur C. Clarke, author of
2001: A Space Odyssey and
other SF stories & novels